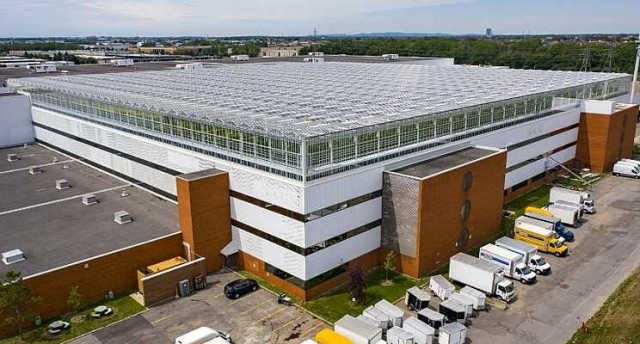 Lufa Farms just opened what it says is the world's largest commercial rooftop greenhouse, seen in this aerial photo in Montreal.

Building on a new hanging garden trend, a greenhouse atop a Montreal warehouse growing eggplants and tomatoes to meet demand for locally sourced foods has set a record as the largest in the world, Courtesy of Bangkok Post

It's not an obvious choice of location to cultivate organic vegetables -- in the heart of Canada's second-largest city -- but Lufa Farms on Wednesday inaugurates the facility that spans 15,000 square metres, or about the size of three football fields.

"The company's mission is to grow food where people live and in a sustainable way," spokesman Thibault Sorret told AFP, as he showed off its first harvest of giant eggplants.

It is the fourth rooftop greenhouse the company has erected in the city. The first, built in 2011 at a cost of more than C$2 million (US$1.5 million), broke new ground.

Since then, competitors picked up and ran with the novel idea, including American Gotham Greens, which constructed eight greenhouses on roofs in New York, Chicago and Denver, and French Urban Nature, which is planning one in Paris in 2022.

A local Montreal supermarket has also offered since 2017 an assortment of vegetables grown on its roof, which was "greened" in order to cut greenhouse gas emissions linked to climate change.

Lebanese-born Mohamed Hage and his wife Lauren Rathmell, an American from neighboring Vermont, founded Lufa Farms in 2009 with the ambition of "reinventing the food system."

At Lufa, about 100 varieties of vegetables and herbs are grown year-round in hydroponic containers lined with coconut coir and fed liquid nutrients, including lettuce, cucumbers, zucchini, bok choy, celery and sprouts.

Bumblebees pollinate the plants, while wasps and ladybugs keep aphids in check, without the need for pesticides. Enough vegetables are harvested each week to feed 20,000 families, with baskets tailored for each at a base price of C$30.

Shopper Catherine Bonin tells AFP she loves the freshness of the produce but laments that some items are always out of stock. "I can never get peppers," she says.

"We are now able to feed almost two percent of Montreal with our greenhouses and our partner farms," said Sorret. "The advantage of being on a roof is that you recover a lot of energy from the bottom of the building," allowing considerable savings in heating, an asset during the harsh Quebec winter, he explains. "We also put to use spaces that were until now completely unused," he said.

Fully automated, the new greenhouse also has a water system that collects and reuses rainwater, resulting in savings of "up to 90 percent" compared to a traditional farm. Lufa "more than doubled" its sales during the new coronavirus pandemic, a jump attributable "to contactless delivery from our online site," says Sorret. Profitable since 2016, the private company now employs 500 people, around 200 more than before the pandemic, according to him.

It is currently working on the electrification of its fleet of delivery trucks and is in the process of exporting its model "to different cities around the world," starting with Canada and the United States, Sorret said. "What's a little crazy," he recalls, is that none of the founders "had grown a tomato in their life" before opening the business.